Dominique Christina - School For Mothers
Listen to the latest SFM Podcast episode:
#168 WHAT’S THE WORST THAT CAN HAPPEN?

Join our Community and get the SFM Newsletter 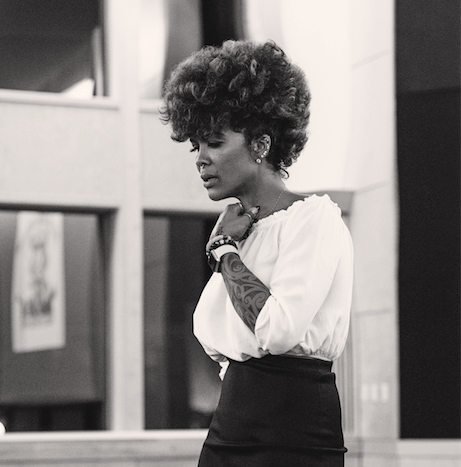 Dominique  is a mother, author of four books, National Poetry Slam Champion (2011), Women of the World Slam Champion (2012 & 2014), social agitator, and intersectional feminist. She is the only person to win the Women of the World championship twice. Dominique is sought after to teach and perform at colleges and universities nationally and internationally every year. Her work appears in numerous literary journals and anthologies, as well as the Huffington Post, IBTimes, Upworthy, and others. She believes entirely in the idea that words make worlds. Listen.

The Bones, The Breaking, The Balm Penmanship Books 2014

They Are All Me Swimming With Elephants Publishing 2015

This Is Woman’s Work, SoundsTrue Publishing 2015

School For Mothers: Who are the members of your family?

At what stage of your life did you realise you needed (and had) a powerful relationship with language?

When I was a child, my mother and grandparents walked around the house reciting poetry all the time. Lots of canonical work: Shakespeare, Edgar Allan Poe, T.S. Elliot, ee Cummings, etc. I loved how delicious language was. I loved how available it was to me. I understood the power of language when I was very young but I did not identify as a poet until I was well into adulthood. Language is a culture-keeper. It can make monsters and it can make saviours. It can introduce you to your possibilities, and it can keep you from them. But when I became a mother, my relationship with language became more urgent. I became more insistent about the reclamation of language and the recognition that most of us we are still borrowing language from others which is not a powerful relationship at all. I wanted to offer something wider to my children. Something with more teeth.

What was growing up in your family of origin like?

My family of origin is replete with over-achievers, scholars, activists, authors, a baseball hall-of-fame (my grandfather, shortstop for the Kansas City Monarchs before baseball was integrated), a professional basketball player (my father: The Chicago Bulls), and a Congressional Medal of Honor recipient (my aunt Carlotta for desegregating Central High School in Little Rock, Arkansas.) They were all so impressive. Mediocrity was simply not available to me. The expectations were high. The bar was high. My mother, professor and scholar, is the most impossibly decent person I have ever known. There was a template of what it meant to be human that was honorable and noble and they gave me that. But I had a lot more wild in me than my family members so I got into trouble a lot. I was smart and talented but I was also full of the world in a way that meant I was going to make a ton of mistakes, get in a lot of fights, cuss ands rage a good deal…and I was given the room to do those things. My family held a wide space for me to get my crazy done.

What led you to claim authentic expression of anger?

The acute absence of any demonstration of anger from my family is what led me to claim it actually. They never showed up in anger so it was something I craved. But the insertion of my stepfather in my life from the age of 4 to the age of 8 gave me plenty of reasons to be angry. He was physically and sexually abusive so I walked around with those bruises for decades, not revealing my experience to my mother or anyone. That left me available to copious amounts of rage and grief which I was more than eager to demonstrate when I became a teenager.

Why is being a whole person crucial to you, as a woman and as a mother?

How would you describe the dynamic between your four children?

They are all versions of me and they are all entirely their own. That makes for a pretty wild ride. My oldest son is a visual artist who is very quiet and shy and extraordinarily empathetic. He does not do conflict. He is a peace-keeper.He views the world through an artist’s lens. My daughter is studious and serious about her future. She has bought into the idea that she is supposed to be amazing and so she is amazing. She likes politics and architecture and is very quippish and sarcastic. Her sardonic wit is quite impressive. Her twin, Amir, is emotional and angry and witty and talented; beautiful singing voice, very good in theater and speech and debate; very irreverent and temperamental. He enjoys conflict more than confluence. And the baby, Igi, is precocious and aware of himself and the world. He is kind-hearted and endearing. Takes care of the people he loves and is the funniest child on the planet who speaks like a poet. Loves the ocean and the creatures inside it. Likes quantum physics. Wants to change the world.

Raising unfettered children who don’t need to shape-shift to fit is an ongoing commitment of yours, how do you engender this and why?

Oh I don’t know how I do it. It’s alchemy. I just want them to show up in the worlds as themselves, not my ideas about who they are but who they actually are. I feel strongly about it because that’s what my mother offered me and it saved my life a thousand times. It’s a tremendous thing to offer to your children. The world is the world. They should know how to bend but not break. They should know their lives are in their own handwriting. I am trying to raise free folks. And the only way to do that is to get out of the way.

What place does cuss-time have in your family?

They get to fire away basically. I don’t throw taboos around language. I find that to be stunting and ineffective. Cuss words are mostly nonsensical but we have attached weight to them and so if using them is cathartic (and it is for me) I want my children to have the same opportunity to blow off steam.

What advice can you give on raising responsible teens?

They will be themselves. They will make terrible decisions. They will flail about. They will pretend to know what they could not possibly know. And they don’t deserve to be hung out to dry for it. They will test their flesh and their intellect. They will learn how to manipulate and mask and endure. My job is to leave a bread crumb trail so they can find their way back if they get lost. The rest is all an experiment in patience and acceptance.

What’s the underlying cultural narrative behind the observation that you’re not a haggard mother?

That motherhood is a burden. That it reduces us and makes us old and spent and resentful. I do not live that narrative. My warrior spirit is magnified by motherhood, not diminished because of it.

How do you experience being a mother?

It is an experiment. Motherhood holds up a mirror. I have an opportunity to interact with all of my moving parts as the result of motherhood.I am larger and more fierce because of it. More aware, more present, more…permanent.

What are your biggest fears about your children?

How important is it to pay attention to who your children are ‘separate to you’ and how do you do this?

It’s essential. I reckon with their personhood. I reckon with their actual lives and identities, not the stories I have made up about who I think they are or who I think they should be. They get to offend me. They get to do things I would neither do nor recommend. They have room to have the human experience without being lassoed to my narrative about what that should look like.

How far will you stand and watch your children meet the world on their own terms?

That is what I am committed to entirely. So in that regard I will stand as far away or as close as I need to in order to make it so.

What experiences most generated your Personhood & Womanhood?

Being abused as a child and not dying. My personhood and womanhood are about the graves I’ve crawled out of. The things I have overcome of which there were many.

In what ways is hardship the route to growth and what challenges/opportunities does this pose for you as a mother?

The only challenge it poses for me is in letting my children have those experiences because of course it means allowing them to be hurt or to suffer even and that is antithetical to what I want to do. But hardship holds an instruction. I know that full well. It is necessary for growth and development and my children deserve to know themselves.

How long does it take for you to create your poems typically?

Minutes. It comes out of me very quickly.

Which performance rocked your soul, and why?

I feel like my soul is always in a state of being rocked. But I suppose the performance I gave for Emmett Till’s family and Trayvon Martin’s family left an indelible impression because these families lost their loved one to violence and it made the work I do feel more real and more urgent. It concretised for me, that when I write about people who have died, I am attempting to re-flesh their bones and reanimate them. That feels like holy work to me and I have a responsibility to the family members of those slain individuals to get it right.

What do you need to go twirl around in the world?

Is there any other way to be in the world? I know no other way.

Where can we hear you speak and read more of your work?

My tour schedule lives on my website as well as the books I have written and the publications my work is in. I am everywhere all the time.

And finally, what is the one common denominator between mothers? (beyond children)

That we did something seismic. We made somebody who is nonetheless not ours. We are ferocious in how we love and what we sacrifice. We split open and authored life for other people and they get to be other people. We are beholden to our mistakes and missteps but we should not be crucified for them. We are holy and unholy at the same time. We are deliberate. We are curating constantly. And we have to work so much harder to preserve our womanness so that it is not entirely consumed by motherhood. We have to fight to protect the women we are so that we are not wholly erased by the  mothers we are. It is intense and sometimes thankless but it is necessary and we are all, in one way or another, trying to keep a hold of ourselves while we engineer safety and wellness and life lessons for the people we made. It’s awesome work. It’s divine work. We pretty much all deserve a chapter in the Bible Going To

Click the links below to connect with Dominique on social media